With Unrest in Haiti, We’re Heading Again to La Gonave

Once again, political unrest in Haiti has created a dangerous situation for our Country Team. The President has postponed his transition from power, dismissed a significant number of legislators, and is essentially governing by decree.

As a result of the political and military uncertainty, gangs are controlling many areas. Fearing an increase in gang violence and other rioting, the Team members are heading from Port-au-Prince to the island of La Gonave, a six-hour ride in an open boat.

“We’re concerned for their safety,” said Gerry Delaquis, the Country Coordinator for Haiti. “Gangs and others can attack them at any time. The team could have gone out, but I wasn’t sure how we could get them back. On one of their last trips, they had to go on an out of the way route that took 12 instead of five hours. Now, transportation might not even be available.

“La Gonave, politically, is riot-free and safe from gangs. So we are sending them there to continue the mission, picking up where they left off last year. It’s not what we had planned at this time, but it gives them the chance to keep working. Originally, they had a mission of providing 600 filters in a week, but now we’re shipping another 600 for a two-week goal of 1,200 new Water Women. That is going to make a significant difference in the lives of many people on La Gonave.”

Gerry expects the political troubles to diminish while the team is away.

“After next week, I expect things to calm down again,” he said. “The Church and others are calling for a transition, so I believe something will happen. We’re planning to bring the team back after the two weeks when things have quieted and gang activity is less of a problem.”

While the disruption may be brief, it could be dangerous.

“Many people could die,” Gerry said. “The gangs are more armed than the army. If they wanted, they could take control of the country, but they are also fighting among themselves, for territory and other things.

“Once again, it is the poor who are most hurt and abused.” 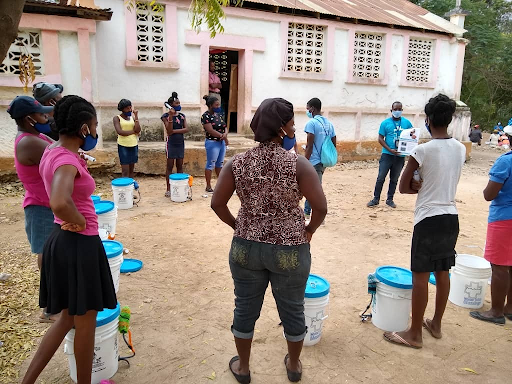